Redhill & District Bar Billiards League was founded in 1948 and is the only bar billiards league in Surrey. Teams from across the area meet on Tuesday nights for league matches and competitions at various local pubs and clubs.

What is bar billiards?

Bar billiards is a traditional game dating back to the 1930s. It is a form of billiards played on its own unique table with the object of potting white and red balls in holes on the playing surface while avoiding knocking over the white and black 'skittles'.

Each hole has an associated score ranging from 10 up to 200, which is scored each time a ball is potted in that hole. If the red ball is potted then it scores double.

Each game is timed using a clockwork mechanism inside the table. A game lasts for around 17-18 minutes, after this time a bar inside the table will fall, stopping the balls coming back to the return tray. When all the balls are cleared, the highest score wins.

Bar billiards is played in leagues across the country in Sussex, Berkshire, Oxfordshire, Buckinghamshire, Surrey, Kent, Cambridgeshire, Hampshire, Suffolk and Northamptonshire, as well as in the Channel Islands. Each county hosts various tournaments throughout the year bringing together players from across the country, with the World Championships being held in each year in Jersey. 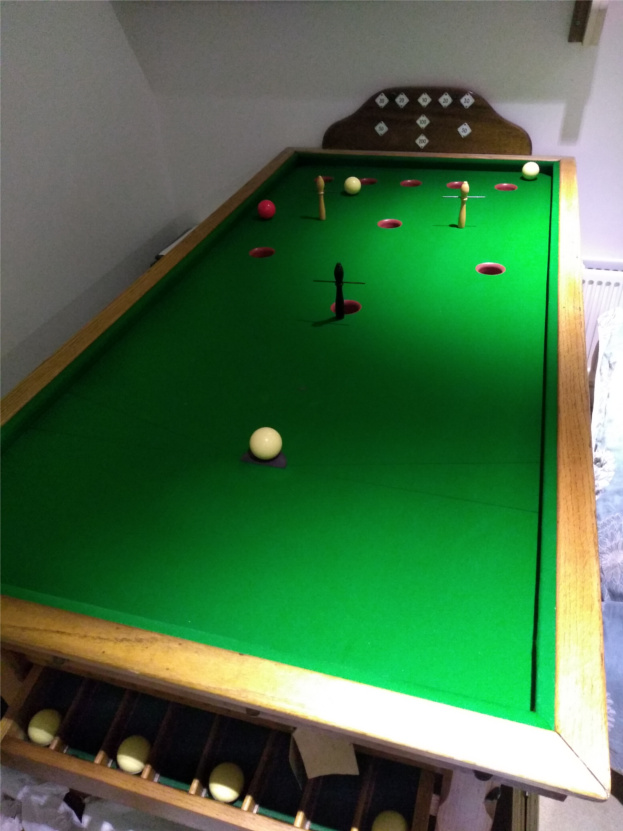 A history of the first 50 years of the league from 1948-1998 is available here in a detailed account written by Simon Tinto.

As of 2018, the league has 13 teams, which play in a single league with 2 divisions, the divisions being decided based on the standings from the previous years. The season runs from October to April with league matches on a Tuesday night. At the end of the season, the divisions are adjusted for the next season based on the final league table. Interspersed with the league matches are various individual and team competitions, also typically running on Tuesday nights. Prizes are awarded to the winning and runner up teams within each division, as well as various individual and team prizes and prizes for the competitions.

As well as the weekly league, there are weekend competitions throughout the year. These range from the 'triples' and the blind pairs, where players are teamed up according to ability to make for a fun competition for players of any level, right up to the Surrey Open, a national tournament where the best from all over the country will come to try and claim the title! At all these events the league also raises money for local charities.

The league is always looking for new teams and players. At its peak in the 1970s there were over 30 teams in the league, but numbers have been in decline so new players are very much encouraged so we can keep the game alive! It's a great game, easy to pick up but difficult to master. If you would like to get involved then head down to one of the pubs on a match night and find out what it's all about!

There is an active forum used by all the leagues here, where you can find out about all the different leagues as well as national competitions and a lot of information about the game. The governing body for the game is the All England Bar Billiards Association. Visit their website to find out details of AEBBA events and information about the game at a national level.